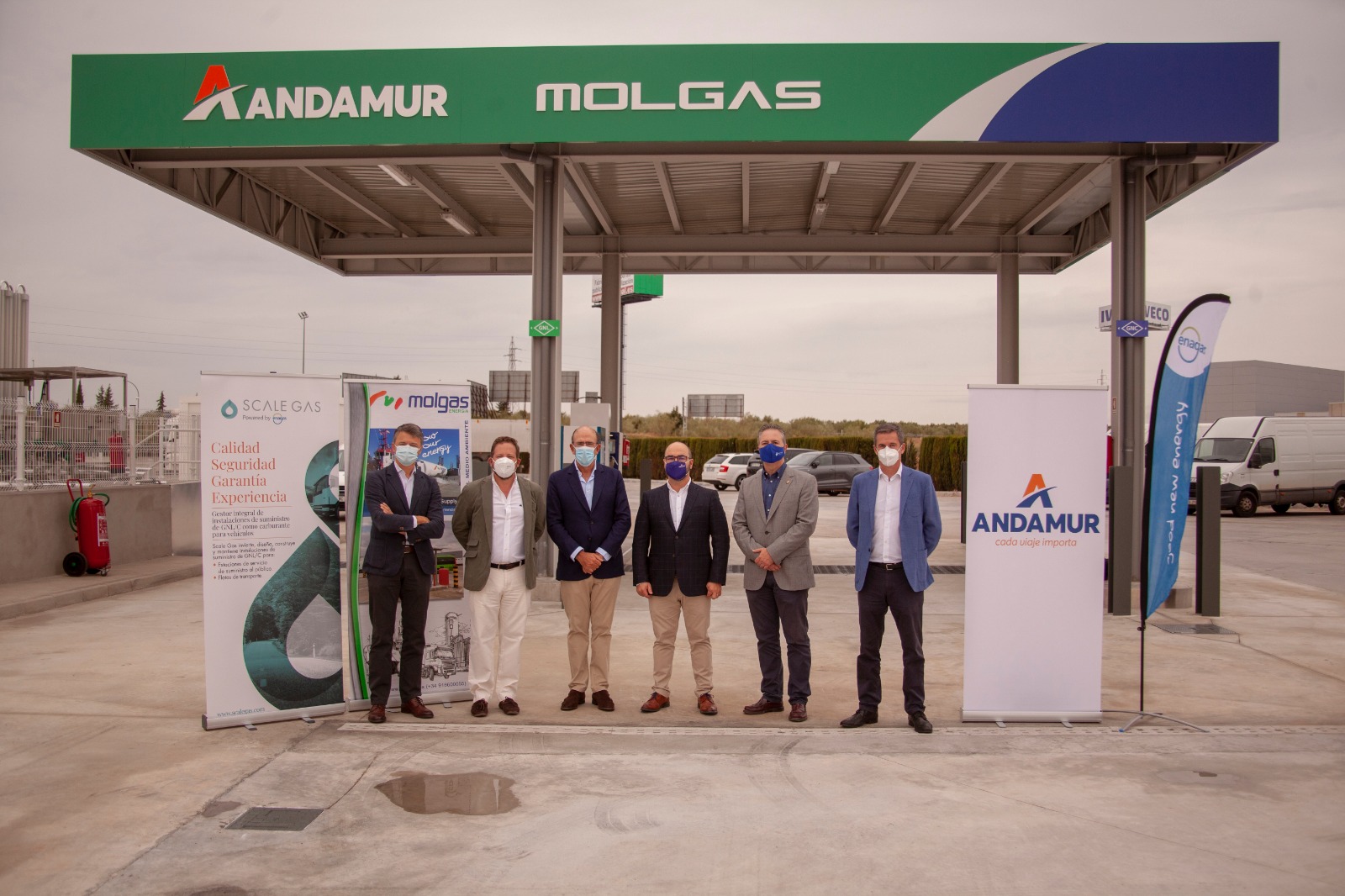 The inauguration of the Natural Gas Station of  Andamur y Molgas in Guarromán was attended by the CEOs of the companies that have participated in this project. Miguel Ángel López CEO of Andamur, Fernando Sarasola CEO of Molgas Energía, Marcelino Oreja CEO of Enagás, Fernando Impuesto CEO of Enagás Emprende and Óscar Maciñeiras CEO of Scale Gas.

For Molgas this is its ninth Natural Gas Station, thus extending the network stations that the company has in Spain.

Andamur and Molgas customers can already refuel Liquid Natural Gas (LNG) and Compressed Natural Gas (CNG) in the first of their Natural Gas Stations in the Andamur Guarromán Service Area. This is the result of the collaboration agreement between both companies.

The new Natural Gas Station of Andamur and Molgas has a LNG pump for heavy vehicles and a double CNG pump for trucks, cars or vans. 24 hours open, it is free access and accepts debit and credit cards, as well as fuel cards from both companies.

Scale Gas, a startup born out of Enagás’ corporateventuring programme, Enagás Emprende, dedicated to small-scale infrastructure and logistics solutions, is in charge of the integral management of the natural gas station.

Before the end of the year, another supply point is expected to be opened in the Andamur La Junquera Service Area as a result of the agreement between Andamur and Molgas.

For Miguel Ángel López, CEO of Andamur, “the start-up of the Gasinera in Andamur Guarromán is a great step forward for the company

We are thus becoming a multi-energy company, capable of supplying all the energy that the transport sector may need: electric chargers, CNG services, etc. We want to give our customers what they need now and in the future.

Fernando Sarasola CEO Molgas Energía considers that “the inauguration of this service station means for Molgas the achievement of another milestone in our ambitious objective of offering our clients a global network (national and international) that covers their refuelling and service needs; the inclusion in our network of an enclave of the logistical importance of Guarromán together with the chosen travel companion, means that this project is born with the highest guarantees of success”.

For his part, the Managing Director of Enagás, Marcelino Oreja, pointed out that “the future of mobility requires technologies and energies that are adapted to the particularities of each transport segment”. Along these lines, he pointed out that “natural gas is currently the only real sustainable alternative that makes it possible to reduce emissions and improve air quality in segments such as heavy transport”, and added that “at Enagás we are committed to innovation and entrepreneurial initiatives that have made it possible to create companies such as Scale Gas, which are now consolidated, and which are developing projects such as the one we are inaugurating today that promote the decarbonisation of transport through natural gas”.

Without a doubt, today is an important day for the companies that have worked to make the Natural Gas Station of Andamur and Molgas in Guarromán a reality, thus showing their firm commitment to the development of sustainable mobility in the transport sector.